Its not often you would see a blog patting a competitor on the back and saying “well don!” but then again, we are not like that at Villas Sur Mer. Now, unless you are offay with Jamaica resorts you may not know of Sandals of Jamaica, its a big resort, Villas Sur Mer is a boutique resort, the difference being size and nothing more, you get the same quality of service at both.

Anyway, I digress: This gentleman has been recognised for his sterling work of almost two decades with the Sandals group. Read this article, its nice to see hard work recognised:

After spending 17 years with the Sandals Group, the recently retired cultural icon Weston Haughton was recognised for his sterling contribution during a special party held by the hotel chain at the Island Routes headquarters in Montego Bay, Monday evening.

Read the rest of the article from here: Jamaica Observer 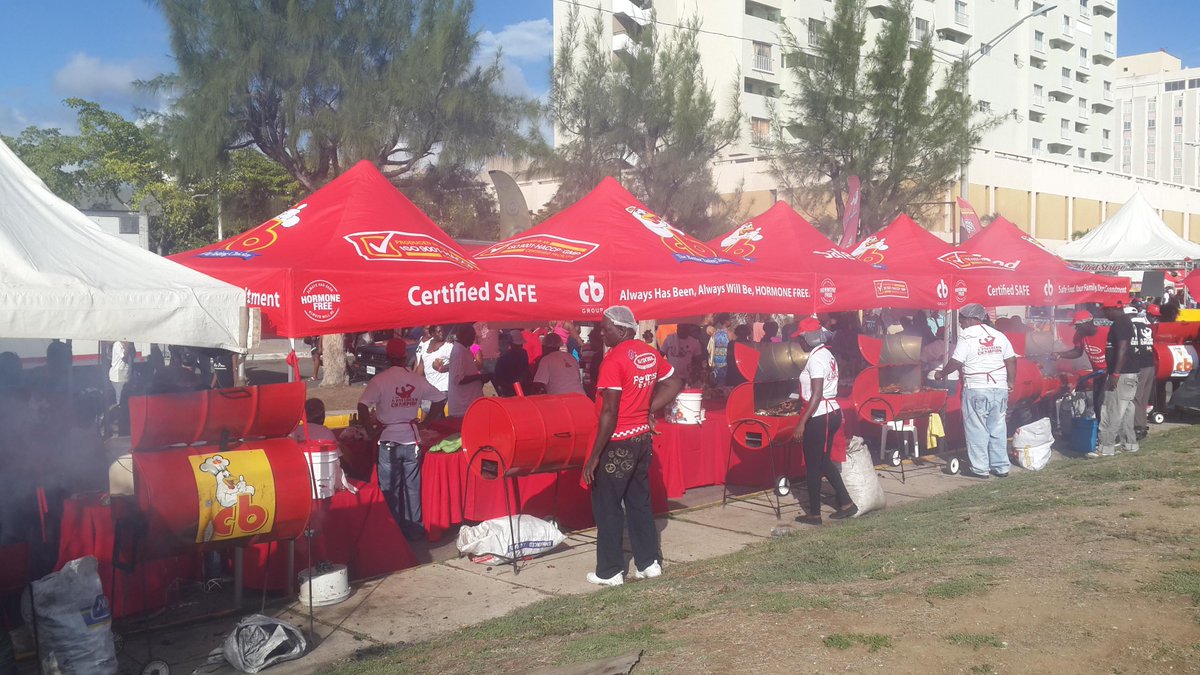 This is a very pleasant site indeed.

I was posting on the Villas Sur Mer Twitter page @VillasSurmer when I spied a Twitter handle that I thought I might like to keep in touch with and as it happens, its all about my favourite Jamaica subject: FOOD! Its none other than the CB Pan Chicken Championship and I wanted to know more!

As luck would have it, the good old Jamaica Gleaner had an article on the event:

The 2014 CB Pan Chicken Championship will bring its ninth competition season to a close tomorrow with an electrifying event featuring non-stop activities for everyone who comes out.

By the time the coal cools, one pan chicken vendor would have won more than one million dollars in cash and prizes, plus the title of being 2014 CB Pan Chicken Champion.

In July, CB Chicken began its annual, island-wide search for Jamaica’s best CB Pan Chicken chef. Three regional eliminations and five months later, 26 men and women are on the verge of proving, with finality, who has the tastiest pan chicken in Jamaica. In doing so, contestants will face off tomorrow in a one-hour cooking competition, which requires a garnished, plated presentation of pan chicken and a staple for judging, plus a signature sauce.

Twitter, there are millions of people all over the world that use twitter, it has become part of our lives, even the News Channels such as Sky News and the BBC use twitter in their reports. Recently, at the trial of Oscar Pistorius in South Africa Sky reporters used Twitter tweets to update us on what the judge and the barristers were saying, it was the ideal tool to use when the reporters could not speak.

Twitter can be used for may things but mainly it is used in its social capacity, to send personal messages, photographs, gossip and more. The businesses have tried to hijack Twitter, as they do with all forms of social media, such as chat rooms, Blogs, face book pages etc. The marketing people soon realised that Twitter had a massive audience and they could highlight their products and services on there.

Does advertising on Twitter work? Does placing your product in with a message of 140 characters really get the point across to the clients that you are trying to attract? I don’t believe they do but I believe it is a great way of spreading the news about a particular location or destination.

Take Villas Sur Mer for example: Villas Sur Mer is located in Negril on the western most point of the island of Jamaica and they are a boutique resort that offers destination weddings, honeymoons, reunions and of course, vacations.

There is plenty to see and do in Negril and Jamaica as a whole, so, Tweeting pictures and videos of Negril would, indirectly help Villas Sur Mer by attracting interest to that part of Jamaica. For example; Rick’s Café and the madmen (and mad ladies) that leap from the cliffs into the Caribbean sea would attract interest as would the beautiful Negril Lighthouse and 7 mile beach.

Connecting to other businesses in Negril and Jamaica is also a great thing, often, some businesses are suppliers to others and so on. I would like to hear what people have to say about Twitter and about linking to each other. Link to us, we always link back @VillasSurMer